I told you last week that I’ll be delivering free trade ideas on the regular, and these will likely come on Wednesdays. (Of course, if I see something I like earlier than Wednesday, I’ll let you know, and if I don’t see anything I like, I’m not going to force it.)

In the meantime, I intend to deliver all the education and trading secrets you need to put real money in your account, which is why I’ve been taking it back to the basics.

Last week, I answered a few of your astute questions, including some on implied volatility (IV) and option selling.

If you didn’t have your question answered, don’t worry, I’ll be answering more this Friday, so be sure to Ask Me Anything right here!

I also broke down the ABCs of call buying for you last week.

This strategy will likely make up about half of my Profit Takeover portfolio, which you can keep an eye on right here.

The other half, meanwhile, will likely consist of long put options — ones that I feel could give me the asymmetric returns I’m hunting in this service…

That’s why today, I’m going to break down the ABCs of put buying, for all the new kids out there.

THEN, we’ll dive into your regular dose of I Spy Impact Money, where I dissect some of the unusual option activity I’m seeing from big-money players today.

Because remember, when the impact money aligns with retail-level interest — that’s what perks MY ears up, as it means there could be enough institutional cash to fuel the stock’s trajectory…

And then, if the stars align, I can get out in front of Wall Street’s momentum trades and beat the big guys at their own game.

Now, there are two types of put buyers in the game: the hedgers and the “vanilla” option bears.

The hedgers’ motive is simply insurance on shares they own.

Buying a “protective put” allows the shareholder to sleep a little better at night, as it locks in an acceptable price to unload the shares (the strike), should they nosedive before expiration.

So a hedger isn’t HOPING the underlying stock will sink — they just want an insurance policy in place in case it does.

The vanilla traders’ motive is to capitalize on a drop in the underlying stock price.

They aren’t looking to exercise their puts — they’re looking to buy a put option on a stock they think will dip, and then sell the option at a higher price (for a profit) when it does. 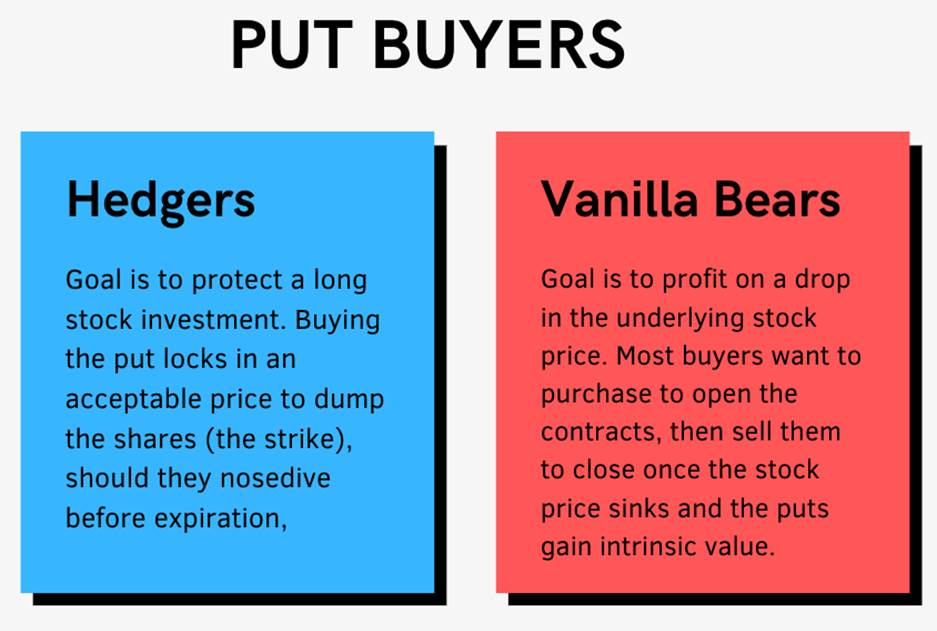 For instance, Jill might buy 400-strike put options on Stock XYZ trading around $400 — again, meaning the options were at the money (ATM), or close to the strike price.

We’ll say Jill’s puts have three weeks until expiration, and she bought them for $3.50 each, or $350, since each option controls 100 shares of the stock.

Fast-forward one week, and let’s outline a few scenarios:

In this case, the value of the puts would fall, due to time decay — the rate at which an option loses time value as expiration approaches — and would harbor no intrinsic value, which is the difference between a stock’s price and an IN-the-money put strike.

With a couple weeks still left until expiration, Jill could let it ride and see what happens… but at risk of the put price continuing to drop.

Or, if she thinks a move into double-digit territory isn’t in the cards by expiration, Jill could go ahead and sell to close her 100-strike puts for a loss, eating some of that $350 premium — though this risk, compared to the potential reward on the trade, is still stacked in my favor.

This situation is essentially the same as if XYZ inched higher, because until the shares make headway south of the $400 mark, they’ll have no intrinsic value. Meanwhile, they’ll continue to suffer from time decay.

Once again, Jill could sell to close the puts and take what she can get to make up for the $350 premium, or she could let the trade play out a little longer and hope for a move lower by expiration.

Either way, the most she can lose is capped at that $350 paid out of the gate.

This is the best-case scenario for our hypothetical put buyer.

In this instance, the put now has $15 in intrinsic value ($400 strike price minus $385 stock price), which more than offsets the time decay suffered in the past week.

Of course, there’s much more nuance to options trading than all that, but we’ll be diving into that very soon.

Hopefully this primer on put buying helps any of my fresh-faced (or at least new-to-trading) Profit Takeover members!

And don’t forget — if you have any questions, you can Ask Me Anything right here. I’ll be selecting some to answer again in this space later this week.

That said, it’s time to check in on those fat cats and what they’re speculating on in the option pit today…

Unusual volume on NOK – Courtesy of Trade-Alert
Click To Enlarge

Penny stock Nokia (NYSE: NOK) shot higher last week on earnings, and is now trading around $4.88 — in territory not charted since the stock’s Reddit surge in late January.

The biggest NOK trade of the session so far is a block of nearly 6,400 4-strike calls expiring June 21. By purchasing the calls to open, the buyer expects Nokia shares to extend their journey north of $4 in the short term.

Again, this “impact money” is just one side of the two-factor authentication trading technique I outlined this week, so if NOK begins to trend on the retail side again, I’ll be taking note.

That’s it for today, Profit Takeover crew, but I’ll be dropping even more knowledge tomorrow!